The story of Rail Rambles – how did this all come about? 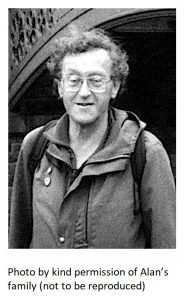 We can thank Alan Howard, a keen walker originally from Lancashire who ended up relocating to Shropshire. His enthusiasm for using public transport to access the countryside, coupled with a chance meeting with a Welsh railway executive in 1989, led to the formation of the original Rail Rambles.

At first, rail rambles were held on a monthly basis and then over time became fortnightly, then once a week, with a dozen or so people on each one. In those early days, they were often focussed on one particular railway line (the Heart of Wales or Cambrian).  As you can see from our programme, this has now evolved and there is a greater choice both in terms of frequency and destination.

Although we primarily walk in rural areas, Alan Howard was keen to promote Town Trails. These date back to the 1990s but came to the fore during the 2001 outbreak of foot and mouth. We have had Town Trails around Abergavenny, Aberystwyth,Birmingham, Chester to name just a few.   One of the highlights was walking through the Netherton Tunnel and having a canalside lunch under Spaghetti junction.

These urban Rail Rambles lapsed for some years but the idea has been resurrected recently and we’ve explored Liverpool, the Black Country and Birmingham. They provide an interesting contrast to our countryside walks.

In 2019, we celebrated our 30 years anniversary.  We  had an eventful lead up to this, with Transport for Wales taking over the franchise.  We also formed the Rail Rambles association, to which all leaders and organisers belong.  At the heart of what we do is to continue offering a programme of free guided rambles, and  having  a slightly more formal set up will make it easier for us to manage the walking programme and to look after everybody involved, including you.

For the future, why not become a part of it and come along to see for yourself?

A more in depth article about Alan Howard, by Kate Ashbrook can be found here and makes for an interesting read.